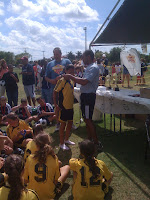 Today was truly a special day. Americans across this land and abroad were taking a moment to remember the the true Hero's of our time. It's all about the many men and women who've made the decision to sacrifice and fight for what they believed in, which was unrelenting and everlasting FREEDOM!

Today, I also want to introduce you to a present generation of young women, who are making a huge and significant statement right now, rather than wait for the unknown possibilities of tomorrow. Today they collectively decided to become and remain CHAMPIONS. They are learning at a young age, to do the things that are right and to take a stand against those things that are wrong. They are learning what it means to persevere, to have child-like faith and to be strong in the face of overwhelming odds. It's about being competitive, yet understanding and exhibiting respect and good sportsmanship toward others. The have learned that there is no "I", in TEAM and they've demonstrated over and over again that there is a major difference between Winners and Whiners. This extraordinary characteristic of theirs, is reminiscent of a book I've read, that bears a similar title, authored by Keith Cameron Smith.

These Young Hero's are known near and far as the West Pines United Adidas Girls U12, Soccer Team.

This weekend they defended their Championship title, defeated all of their scheduled competitors, at the Disney Wide World of Sports Tournament, in Orlando, Florida.

I am very proud of each and every player on this team, as well as all of their wonderful parents.

Special thanks and congratulations to head coach, Wayne Smith and his assistant Danny Amador.
Posted by Clarence at 2:31 PM