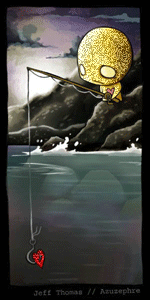 
So was it fate, or chance that you met? Or should I ask myself..., did you pick them or did they pick you?
I would suggest that we all spend the time needed to acquire long and lasting relationships built on common sense values. Such as, do I need or do I merely just want a relationship?
As the the picture above may indicate... He or She are exactly who they are. You can't change them, nor should you seek to. Plain and simply my friends.. It is what it is and they are who you thought they were.
Perhaps if your luck continues to run out and you're tired of falling in love, when the true goal needed to be, growing in love. Consider this the next time, you cast a line in the sea of romance to hook... "the one".
Maybe, just maybe its a real good time to also practice, "CATCH and RELEASE"!
Posted by Clarence at 2:06 PM 6 comments: